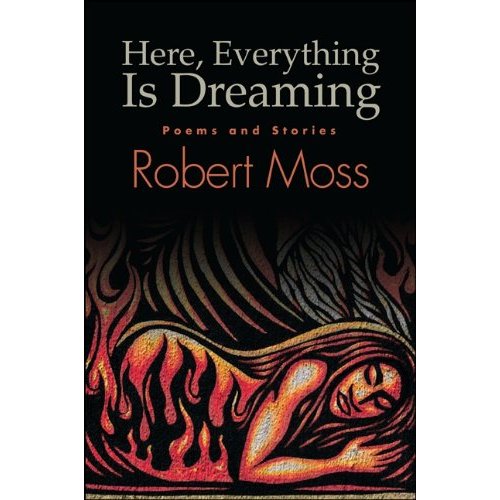 I often envy poets.   As a writer, I frequently wish I could let my words go wild – and yet, of course, the dichotomy is that poetry at its best is also highly disciplined, a technical craft it takes years to master.

It’s this combination of technique and wild words that Australian-born, now US based author Robert Moss, brings to Here, Everything is Dreaming, his poems and short stories spanning a twenty-year period.

Take the first two stanzas of ‘If You Spill a Dragon’, for example:

If you spill a dragon,

don’t think about washing the tablecloth.

Everything interesting happens on the boundaries,

and when you are real, shabbiness doesn’t matter.

You can’t see the whole picture when you’re in it,

and inside the soft animal of your body, you forget

that you are a star that came down because

you wanted a messier kind of love.

What a wonderful visual feast is contained in only those eight lines!  And it’s a feast that is repeated right throughout this enticing volume full of love, life, death, sex – and dreams.  It is also a paean of praise to the natural world, and in particular the earthly and other-worldly animals that accompany us in our lifetimes.

As a dream-meister Moss is well known.  For many years he has taught and practiced Active Dreaming, a synthesis of dream-work and shamanic techniques.  His books include Conscious Dreaming: A Spiritual Path for Everyday Life; Dreamgates: Exploring the Worlds of Soul, Imagination and Life Beyond Death; and The Secret History of Dreaming.  His novels include the three-volume Cycle of the Iroquois – but this is his first collection of poems.  He is also an imaginative and accomplished artist, and perhaps it is this artist’s sensibility that creates the rich vein of visual imagery that runs through these poems and stories….

The cherry trees are disconsolate lovers;

they can’t hold their pink smiles

after the unkindness of that night…

Before the secret green cells in the leaf

drink from its suncatchers, light walks

all paths through the protein scaffold…

Moss wasn’t always a poet.  He began his career as a lecturer in Ancient History at ANU in Canberra, but after a move to the UK to study for his PhD he joined the editorial staff of The Economist as a writer and special correspondent.  He was an active commentator on international affairs on the BBC World Service and on British television, and also wrote for publications as diverse as The Daily Telegraph and The New York Times Magazine. He later became a full-time writer, publishing a series of suspense novels.

It’s an intriguing combination of erudition and belief in the power of dreaming that gives both his poems and stories layers of meaning.

In his story The Other, Again, Moss uses Jorge Luis Borges’ story The Other as a springboard to explore him meeting a younger version of himself, in what may or may not be a dream.

This story, written in 2010, reveals a writer at peace with the extraordinary, and, it has to be said, his move from the mainstream into his shamanic dream-work was extraordinary in itself.

In 1986, as Moss tells it, he felt the need to get away from the city life and moved to a farm in upstate New York, where he started to dream in an unknown language, which, after investigation turned out to be an archaic form of the Mohawk language.  Helped by native speakers to interpret his dreams, Moss came to believe he had been put in touch with an ancient healer – a woman of power – and that he was being called to a different life.  It wasn’t long before one of his animal spirits – the bear – made itself known to him – and it’s the bear that often guides, reveals and surprises him in his work as a shaman.

Here too, perhaps is the poet’s courage to charter unknown imaginative terrain – not easy to put aside a mainstream international career for a ‘calling’ into the unknown, but Moss embraced his new life with the same dedication he had put into his previous careers.  His central premise being that dreaming isn’t just what happens during sleep, but that active dreaming is also a source of guidance, healing and creativity beyond the reach of the everyday mind.

It wasn’t long before his work and writing attracted international attention and he was asked to present his method at the conference of the Association for the Study of Dream at the University of Leiden in 1994.

All of this long career involved in words and worlds of so many different varieties come to fruition in Here, Everything is Dreaming – at the height of his powers Moss entices us in; creating a pathway between the worlds, and a way for us more mere mortals to draw closer to the gods, goddesses and animals spirits that wish to live through us.  This is a book full of texture and wonder from a dreamer and poet in his prime.

You can purchase Here, Everything is Dreaming through the State University of New York Press:  http://www.sunypress.edu/default.aspx or directly through Amazon as a kindle or paperback, and, of course from US bookshops!